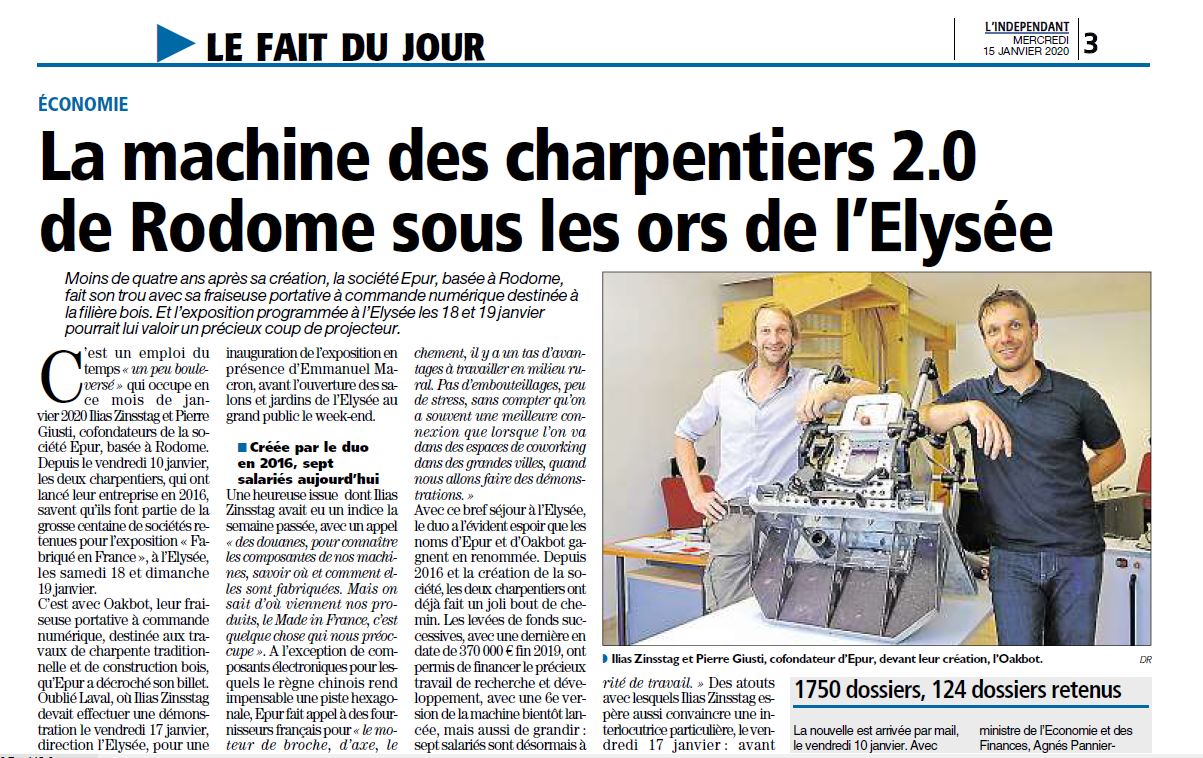 PRESS / OAKBOT at the Elysée

Less than four years after its creation, the company Epur, based in Rodome, made its mark with its portable numerically-controlled milling machine intended for the wood industry. And the exhibition scheduled at the Elysee Palace on January 18 and 19 could earn it a precious spotlight.

Aude: the Elysée, a springboard for Rodome's company and its digital milling machines

Less than four years after its creation, the company Epur, based in Rodome, made its mark with its portable numerically-controlled milling machine intended for the wood industry. And the exhibition scheduled at the Elysee Palace on January 18 and 19 could well earn it a valuable spotlight for new contracts.

Ilias Zinsstag and Pierre Giusti, the two co-founders of the company Epur, based in Rodome, occupy Ilias Zinsstag and Pierre Giusti in this month of January 2020. Since Friday January 10, the two carpenters who launched their business in 2016 know that they are part of the big hundred companies selected by a selection committee for the exhibition "Made in France", scheduled at the Elysée on Saturday January 18 and Sunday January 19. It is with Oakbot, their portable CNC milling machine, intended for traditional carpentry and wood construction work, that Epur landed its ticket. Forgotten Laval, where Ilias Zinsstag was to perform a demonstration on Friday January 17, towards the Elysée Palace, for an inauguration of the exhibition in the presence of Emmanuel Macron, before the opening of the Elysée lounges and gardens to the general public on weekend.

A happy outcome of which Ilias Zinsstag had had a clue during the past week, with a call "from customs, to know the components of our machines, to know where and how they are manufactured. We had to give them details during the day. But we know where our products come from, the Made in France is something that concerns us ". In fact, with the exception of electronic components for which the Chinese rule makes a hexagonal track unthinkable, Epur calls on French suppliers for "the spindle motor, axis, guidance or even sheet metal", specifies Ilias Zinsstag . Who does not forget to specify that "all the assembly is done from A to Z in our workshops in Belcaire".

Enough to fully meet the specifications of the event scheduled by the Presidency of the Republic. All the more so as Epur adds to "Made in France" the advantage of participating in rural anchoring. Originally from the Sault plateau, the two co-founders never dreamed of looking elsewhere: "We are attached to this territory, we hope to add a small stone to the edifice of its local development. And frankly, there is a lot of The advantages of working in a rural environment No traffic jams, little stress, not to mention that we often have a better connection than when we go to coworking spaces in big cities, when we go to do demonstrations. "

Position yourself for the Notre-Dame site

With this brief stay at the Elysee Palace, the duo clearly hope that the names of Epur and Oakbot will gain fame. Since 2016 and the creation of the company, the two carpenters have already come a long way. Successive fundraising, with the most recent of € 370,000 at the end of 2019, made it possible to finance the precious research and development work, with a 6th version of the machine soon to be launched, but also to grow: seven employees are now at the work for a company which, between 2018 and 2019 sold eight Oakbots, including six as part of a beta-test program, with the promise of return from their customers. In 2020, Epur plans to have 30 machines and begin exporting with this machine that Ilias Zinsstag presents as the ideal alliance "of tradition and modernity, know-how and digital technology. We were all the two carpenters, and we said to ourselves, when we were making dozens of identical parts, that it was worth it to save time, comfort and work safety. "

Assets with which Ilias Zinsstag also hopes to convince a very special interlocutor, on Friday January 17: before the inauguration, the entrepreneurs will meet Agnès Pannier-Runacher, Secretary of State to the Minister of the Economy and Finance. The opportunity to discuss a very particular issue: that of the reconstruction of Notre-Dame. A subject that trots in the head of the duo since the terrible fire. "We want to sensitize politicians by telling them that the reconstruction must be done with French oak, French workers ... and French machines." An idea that they also hope to be able to blow in the ear of Emmanuel Macron, expected on Friday at 5 p.m. for an inauguration and a tour of the stands.

Original article by Antoine Carrié, published in the independent on January 15, 2020
Read on l'indépendant 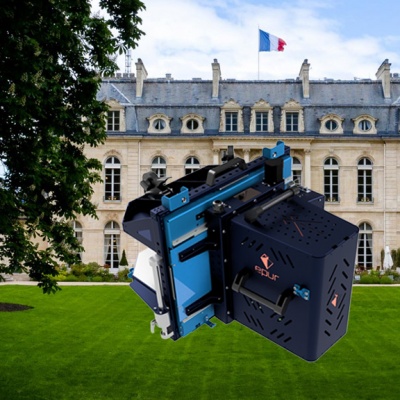 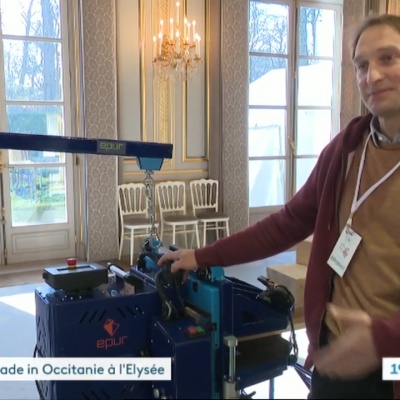 Discover
Meet us
You want a quote or a demonstration in your premises ?
Now is the time to contact us to meet. 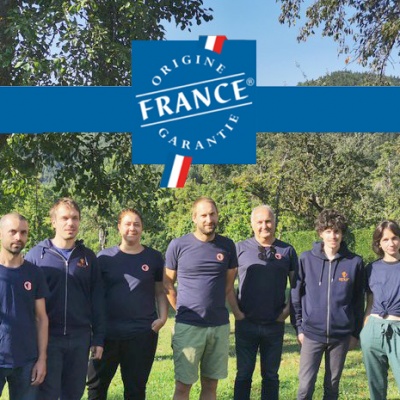 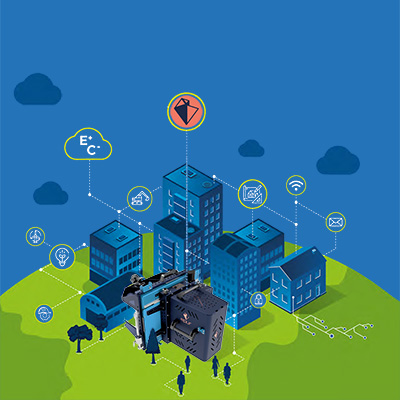 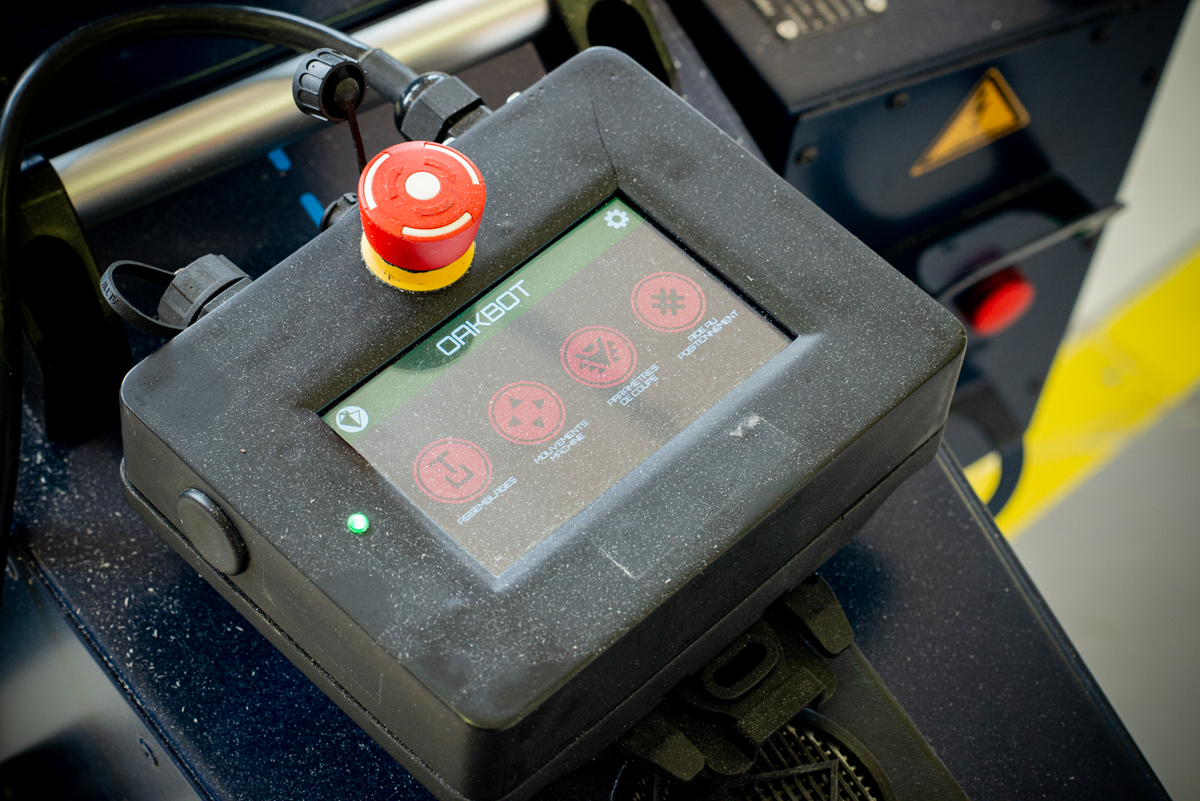